My first typewriter was a portable Smith Corona, acquired second hand in 1968.

I had to thump the keys to make an impression, and insert Tippex paper to correct any mistakes. That was no easy task if I was also producing carbon copies. My most challenging project was to type up three copies of my husband’s MSc thesis  on this primitive machine. By the end of it I knew all about glass ionomer cement and had a stinking headache and repetitive strain injury to boot.

I now find that such a machine is a period piece and has a certain monetary value!  Maybe I should have kept it.

In the late 1980s I graduated to an electronic model. Still a typewriter with inked ribbon, but this time requiring a lighter touch and with the benefit of a single line display.  A chance to review the last few words before they were printed.  A real step forward.

Life then became something of a dawdle with the advent of the computer, although Word Perfect did require me to memorise certain key stroke combinations – Ctrl and B for ‘Bold’, Alt and N for ‘New Document’, for example. Tippex and carbon paper were metaphorically binned, while automatic first line indent and page numbering took some of the strain.

Future advances came more through the software than the machine itself although some might argue that later versions of Word became too clever by offering more options than the average user would ever need or want, thus cluttering up the screen and slowing down the functionality. Notwithstanding all of that, its greatest gift to me has been the bullet point.

These days I can hardly write a report or draft minutes or even create a strategic plan for editing Never Do Harm without composing it straight on to the computer, making liberal use of the magic bullet.

Now it seems I may have to loosen my attachment to my favourite tool.

I have recently begun a creative writing course with a difference. ‘Drawing on the writer within’ encourages and facilitates creative expression and development via a series of activities and homework designed to help the writer find his or her authentic voice.  The tutor, Angela Jeffs, bemoans my use of the bullet point. We’ve had our disagreements over it, so I’ve tried to reflect on my love of the bullet.

The Oxford Dictionary states that bullet points are used to draw attention to important information within a document so that a reader can identify the key issues and facts quickly. Maybe my bullet affection is because I like to help others understand, or because I tend towards economy of action for maximum effect.

But how relevant is identifying key issues and facts to the reader of fiction? The reader wants to visualise the scene, absorb the atmosphere, feel the emotion. It’s a different type of understanding.

When you write with another person as I have in Eight of Cups and Never Do Harm you have to attempt to marry your styles to some extent. My weakness is in description. Jones, on the other hand, does it naturally and well.  Writing rich description to supplement my focus on dialogue is my challenge.  Tapping into the right brain, rather than being entrenched in the left hemisphere.

Maybe I need to change my motto to ‘I love metaphors‘!

The Cambridge Dictionary says a metaphor is an ​expression, often ​found in ​literature, that ​describes a ​person or ​object by referring to something that is ​considered to have ​similar ​characteristics to that ​person or ​object.

So maybe the best way to convince me is to prove the point.

Here’s a description of a character from Tom Wolfe’s The Bonfire of the Vanities.

“Kramer liked to survey his face and his build in the mornings. What with his wide, flat features, his blunt nose, his big neck, nobody ever took him for Jewish at first. He might be Greek, Slavic, Italian, even Irish – in any event, something tough. He wasn’t happy that he was balding on top, but in a way that made him look tough, too. He was balding the way a lot of professional football players were balding. And his build… But this morning he lost heart. Those powerful deltoids, those massive sloping trapezii, those tightly bunched pectorals, those curving slabs of meat, his biceps – they looked deflated. He was fucking atrophying!”

Now in bullet speak, Kramer might be described as:

I’m beginning to get the point. It seems that in creative writing: 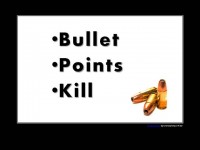 Too late now to change the prominently featured bullet point list in the Just Squeeze Me chapter of Eight of Cups but do I want to? Perhaps this is a rare example of a legitimate creative use of the tool.

Nancy is tired, weighed down by family and work, and finds herself distanced from the Sales Plan slide presentation that her boss is giving the team.  She replaces the variables on the final slide with some of her own:

“Objectives: To  get through the day.

Methods: Just keep on going, one foot after the other.

a) patience (running out fast as far as Mother was concerned)

b) money (never enough given the school fees and horses)

d) husband (can’t always be relied upon when needed)

Outcomes: God knows how this will all end up.

Risk factors: My sanity, I think.”

This  device has conveyed to the reader, in few words, a huge amount of information about Nancy’s state of mind.

Well – where does your vote go on the value of the bullet point in fiction?  Let us know!

Mirren Jones is the pseudonym of the creative writing partnership of Marion Duffy from Scotland and Elaine Atkins from Wales. They have written two novels - 'Eight of Cups' and the newly published 'Never Do Harm'. View all posts by Mirren Jones

Mirren Jones is the pseudonym of the creative writing partnership of Marion Duffy from Scotland and Elaine Atkins from Wales. They have written two novels - 'Eight of Cups' and the newly published 'Never Do Harm'.