According to Chinese Astrology, the Year of the Horse (one of 12 signs of the Zodiac) begins today and will end on 18th February 2015.  I have to say I’m rather excited about this for a number of reasons:

a)      born in 1954 my birthday falls under the sign of the horse;
b)      one of the occupations in my portfolio working life is as a horse whisperer – working with people and their horses to improve communication and performance (see www.clocktowerstud.co.uk for more details);
c)       I spend a lot of my life with my own horses and ponies; riding, training, and generally ‘hanging out’.  Horses have been a passion since I could first walk and talk;
d)      hopefully we will see plenty of literary references in the media to the horse this year;
e)      Chinese astrologers are recommending that people born under the sign of the horse who will be 60 during the year should have a big party ‘to balance the luck’.  Well, I’m all for that, given that I was too ill on my 50th to get out of bed, let alone go party! 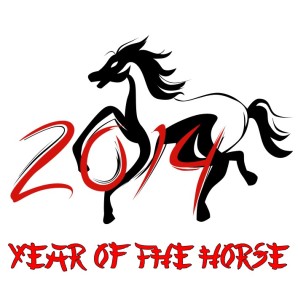 What characteristics are people born in The Year of the Horse supposed to possess? Let’s consider the positive ones first: they will be ‘sanguine, sharp-minded, dress fashionably, gifted with a silver tongue and have acute insight . . .engaged in intellectual activities and sports’.  All true of course! And the negative ones? Well, never mind about those . . .

Mirren and I like astrology and believe it has some merit both in our lives and for our writing.

We find it useful, for example,  in working up characterisations.

END_OF_DOCUMENT_TOKEN_TO_BE_REPLACED

Seeing situations in another light seems to be a theme this week. I have just finished reading The Curious Incident of the Dog in the Night-time by Mark Haddon who writes with the voice of a boy with autism.  He taught me that hating brown and yellow is really no different from having favourite colours like blue and green.  And that having a strategy to cut out extraneous and disturbing noise makes logical sense – even if his is not the one I might use.

Then Richard Rohr in his daily meditation which arrives by text each morning, pointed out our human tendency to feel right and special only by making others wrong or lesser in some way.  We handle paradox very badly and so remain cut off from much of the spiritual richness of life.

And today in an Angela Jeffs’ workshop on Proprioceptive Writing , I learned that writing from a relaxed and meditative mind can free up imagination and allow an authentic voice to emerge.

So I am keen to see how that different light, which has hopefully rebooted my conscious and subconscious in several ways, will affect my writing this week.

And if you haven’t read In Another Light by Andrew Greig, check it out. I loved it, Jones didn’t – we don’t always see things in the same light!

And Maureen, Kathleen and Corrine.  Let’s also have Mary, Margaret and Marilyn.  And of course Dougie, Jimmy and Billy. Without forgetting Theresa, Kevin and Gerard.  Ah, those names from the 50s and 60s.

When Jones and I were building our characters for Eight of Cups, we had a real trip down memory lane sharing names from our schooldays.  Jones contributed a few Welsh ones of course – Bethan and Beti.  I had my Morags and Ionas.  In the end we plumped for Patricia, Diane, Lesley, Alix (previously known as Sandra but socially climbing by the time we met her), Nancy and Carys.  Their bell-bottomed, flowery shirted male friends were Michael, Willie, Gerald, Nick, Trevor and JJ (the American one).

Now, however, if we end up writing about their grandchildren, we’ll have go for Kaitlin, Naeve, India, Amber, Lewis, Sonny and Buzz!

Working with friends on ideas for this year’s Bookmark Festival in Blairgowrie, we chatted about fantasy writing.  My problem with that genre is often focused on struggling with the characters’ names, finding it difficult to remember who is who. But I’d never pondered how the author comes up with the names in the first place.  Bruce Crichton gave me some tips:

END_OF_DOCUMENT_TOKEN_TO_BE_REPLACED 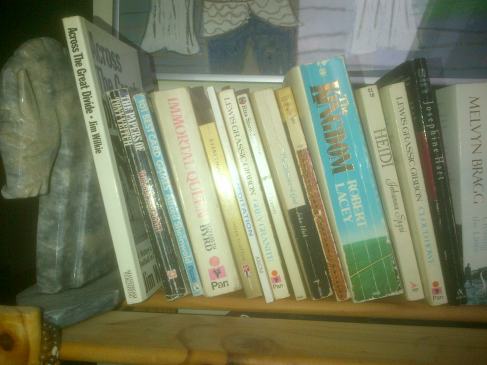 Yesterday, I had a surreal experience. While dragging myself round a typical Saturday’s chores, I was waiting for the tumble dryer to complete a 10 minute towel softening stint, when my eye was caught by an adjacent bookshelf. My tumble dryer is located in a cupboard on the upstairs landing – a multi-purpose storage area, home to a mini Chinese laundry, innumerable boxes of family photos, a spare uncomfortable futon for the foolhardy who’ve imbibed one too many, and loads of books gathered over the years, and shelved in no particular order.  Or are they? I was taken aback, and taken back through the years by an apparently random shelf of books which seemed to encapsulate the key periods and interests of my lifetime.

Heidi by Joanna Spyri – the mountains in summer, the wildflowers, the alpine hut, sleeping on a bed of straw.  It was a far cry from a life in a Dundee suburb, one of my very first loves and prompted a detour to visit  Heidi-land while in Switzerland a few years ago.

Sunset Song by Lewis Grassic Gibbon – a school reader, and the first novel to touch an invisible place where roots, primeval attachment and a burgeoning sense of identity lay. One of the few books I have returned to several times over the years.

Across the Great Divide  by Jim Wilkie – a history of professional football in Dundee, evoking memories of pride, excitement and quality time spent at Dens Park with my late father every second Saturday from age 10 to 18.

Everything Elvis by Helen Clutton – the book of facts I could probably have written myself such was my appetite for all things Elvis from the days of Blue Hawaii onwards!  Very useful on quiz nights. END_OF_DOCUMENT_TOKEN_TO_BE_REPLACED

This year, and from now on, instead of moaning about being too busy, I am resolved to use my time more wisely and for better quality outcomes.  For example, I am no longer wearing anything that I don’t like or doesn’t do me any favours – and I don’t care if I have spent good money on an item or if the result is that I am left with very few sartorial options – I am more interested in dressing quickly and not dithering in front of the mirror debating with myself what to wear, trying on and taking off the many impulse buys current residing in my wardrobe.  Likewise, I am not wasting time reading anything unedifying, or poorly written.  With all those wonderful books out there?  It would be madness.

It was reading and revelling in And the Mountains Echoed, Khaled Hosseini’s latest book, which prompted this latest lifestyle decision.  I had refrained from buying it, and particularly from downloading it on to my Kindle, in the hope and belief that someone (with a big hint from me) would present me with the book for Christmas.  My daughter – and the book – did not disappoint.  I have spent a typically reclusive festive season delighting in the quality of his story-telling.

In contrast, I picked up while shopping in a certain supermarket, Sisterland by Curtis Sittenfeld.  It’s not a bad story.  Two sisters with certain psychic powers, one who is open about the fact, and the other who denies it – but it fails to charm, inspire or engage.

The challenge is to determine just what is the difference in the way these two writers put words on paper.  Does Hosseini write a basic story and then work on improving his use of language and enriching the quality of his exposition?  Or does his mind work such that he produces quality straight off? Sittenfeld can construct a decent story.  So can Mirren Jones. But can either of us create a literary experience I wonder?

We’re currently trying to complete the basic storyline of Never Do Harm.  And then the task will be to transform it into an experience.  That will be a true quality outcome.

Mirren Jones is the pseudonym of the creative writing partnership of Marion Duffy from Scotland and Elaine Atkins from Wales. They have written two novels - 'Eight of Cups' and the newly published 'Never Do Harm'.